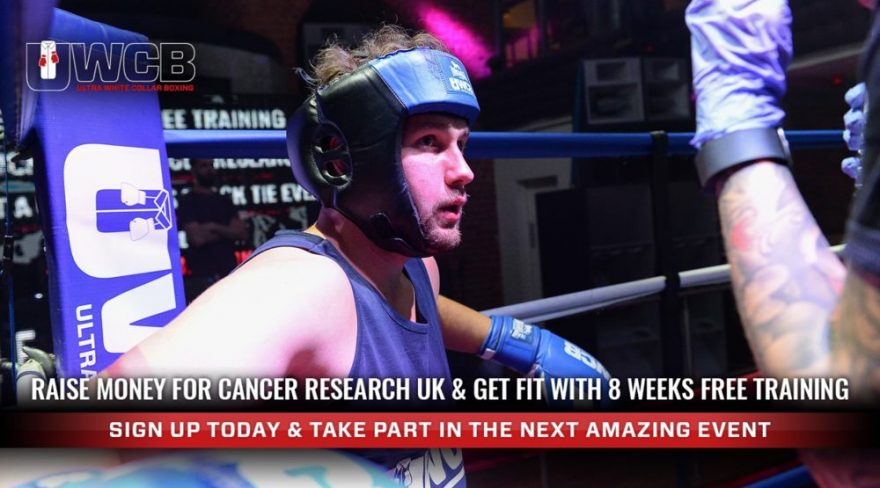 On the 8th July 2017, Bare Bones Marketing employee Alex Ilchenko participated in Ultra White Collar charity boxing event, with the aim of raising funds for Cancer Research. Raising money for the Cancer Research was especially important to Alex, and it was the main reason he went ahead with the challenge.

The first ever time Alex tried on a pair of boxing gloves was during the first UWCB session, and the eight weeks of ridiculously intense training was over in a blink of an eye, as Alex saw himself facing a very experienced opponent.

“During the first couple of weeks I would struggle to get out of bed in the morning, as my muscles were extremely stiff. The coaches were pushing my body to the max during every session, but it was so worth it on the day! The lads were an amazing bunch, and I genuinely enjoyed every day of training, although you literally had to crawl out of the gym when it was over”.

The 8th July was massive for Alex. The fight night fell on the day that Alex was organising the biggest event in his life and the biggest event of it’s kind in Cheshire, trAction Crewe. A whole day of being rushed of his feet before the fight night was a real test of stamina. However, with the first day of the event being a huge success, Alex was mentally motivated for the fight, despite feeling physically exhausted.

“My fight was scheduled to be the final fight of the night, and when I turned up, I realised I had approximately 15 minutes to have a medical check and get warmed up for the fight! Before I realised what was happening, I was on my way to the ring and probably the hardest eight minutes of my life. As soon as I stepped into the ring, the nerves got to me, and I completely forgot about what I was told by the coaches. It is fair to say that I was absolutely destroyed by my opponent in round one, and worked extremely hard to make a come back in round two. If it wasn’t for the cheering of my family, friends and work colleagues, who came to support me on the day, I genuinely would have struggled to get up and fight after round two. However, during round three, I started to gain my confidence as my combinations and footwork started to pull off, and I was scoring vital points. Being the final fight of the night, the crowds were going wild as everyone anticipated the final result. Despite my surname being called out wrong, I was ecstatic to be announced the winner, after the eight hardest minutes of my life. Thinking back, I couldn’t have asked for a better opponent, who I had lots of respect for. We both knew we are doing this for a good cause and we did our best to keep the fight clean and respectful”.

We were happy to have Alex back in one piece, and he managed to raise £240 for Cancer Research Charity. As a company we are passionate about our corporate social responsibility and community involvement. We always try and support and encourage our employees during such initiatives.

Scroll to Top
Privacy Notice
We may ask for personal information from you. This information is necessary for one of the reasons specified in the General Data Protection Regulation. Please read our full privacy notice at www.bbmarketing.co.uk/privacy If you have any concerns, please contact our Data Protection Officer here
Cookie Notice
This Website makes use of cookies. These cookies, which are listed below, are not strictly required for a service you've requested from us, though we think they have the potential to enhance your experience:
Google Analytics: The cookie is primarily used to track visits to any site that uses Google Analytics.
Retargeting Cookie: These cookies are used to deliver adverts to you, limit the number of times you see them and measure the effectiveness of the campaign.
You have the opportunity to set your web browser to a) accept all or some cookies, b) to notify you when a cookie is issued, or c) to receive no cookies at any time. Option c) means that this Website can't provide personalised services and you may not be able to take full advantage of all of its features.
Refer to your web browser's 'Help' section for specific guidance on how it allows you to manage cookies and how you may delete cookies you wish to remove from your computer.
For more information about the cookies we use, please read our privacy notice at: www.bbmarketing.co.uk/privacy.
Accept Read More
Privacy & Cookies Policy